What is sex trafficking?

Many policy makers (in Denmark as well as internationally) are still debating what the term "human trafficking" means.

The 2000 United Nations Palermo Protocol established a generally accepted definition of trafficking as the following:

"The recruitment, transportation, transfer, harboring or receipt of persons, by means of the threat or use of force or other forms of coercion, of abduction, of fraud, of deception, of the abuse of power or of a position of vulnerability or of the giving or receiving of payments or benefits to achieve the consent of a person having control over another person, for the purpose of exploitation".

Exploitation shall include, at a minimum, the exploitation of prostitution of others or other form of sexual exploitation, forced labor services, slavery or practices similar to slavery, servitude or the removal of organs".

The anatomy of sex trafficking.

Slave trading represents the supply side of the sex trafficking industry. Slavery represents the demand side. Within these two components, there are three steps:

....And the "goods" for sale are the women forced into prostitution! The details of how the business behind human trafficking functions reveals the industry's vulnerable points, namely, the drivers of profits and the market force of demand. Analyzing these forces will help us to derive the best tactics to treat the infection. To ensure that the business of sex trafficking is eradicated in the long term, the conditions in the "host organism", that first gave rise to the infection - namely, poverty and economic globalization - must also be addressed.

The interrelationship between these three elements reveals the anatomy of sex trafficking, as the figure below shows:

The acquisition of sex slaves primarily occurs in one of five ways: Deceit, sale by family, abduction, seduction or romance, or recruitment by former slaves. Each of these means are utilized in almost every country; however, local factors promoted certain means over others.

The movement is achieved by almost any conveyance imaginable e.g. in the trunk of a car, by bus, train, plane, speedboat, ferry and even by foot or on horseback, depending on the region of the world.

The exploitation of victims of human trafficking into prostitution in particular involves the violent coercion of unpaid sex services (through in essence, the exploitation begins the moment the slave is acquired).

The trafficking industry is very complex. Within the industry there are many different actors involved.

Many, except the victims themselves, profit from human trafficking.

Establishes contact and moves the individual, often by deception but sometimes also by force, to brokers or directly to employers, such as a brothel or bar owners or managers.

Typically buy women from recruiters and then sell them to an employer.

There may be more than one middleman (e.g. a broker may buy from a recruiter and then sell to another broker, who then sells to the employer).

Organizes and oversees the trafficking transaction, or more typically, set of transactions. This role is usually played by a relatively professional criminal organization or group. The term for this role -Contractor - is comparable to that of a general contractor in a legitimate business a project overseer who contracts out some of the labour for the project.

Accompanies women on the trip by airplane, train, bus and car or on foot to their destination. Transporters may take the woman through one or more transit cities or countries. They usually deliver the women to a broker at a border or inside a destination country, but sometimes the delivery is directly to an employer.

Purchases and then sells the commodity to the customer, and provides a place of business for sex. Employers provide the women with a place to live and work; set up and inform them about the conditions of their work, living arrangements, lifestyle as well as conditions of debt.

Employers are most commonly bar, club, or brothel owners or managers; a small number of employers are street pimps and have no business establishment.

The enforcer (a guard, roof)

Provides protection for the place of business and to a lesser extent, the trafficked women. Enforcers protect the business from other criminal gangs, from extortionists, and from police or immigrant raids; they see that the women follow the house rules, and in particular, that they do not escape.

The enforcer may also make sure that the customer pays what he owes and otherwise abides by the house rules.

Enforcers particularly if they are members of organized crime groups may also be extorters; that is, on behalf of their crime group, they extort or demand money from brothels or bars, and if the owners don't pay, the crime group retaliates.

Extortion may be either a specialized enforcer role or one of several tasks of an enforcer; the line between extortion and payment for enforcement is thin. 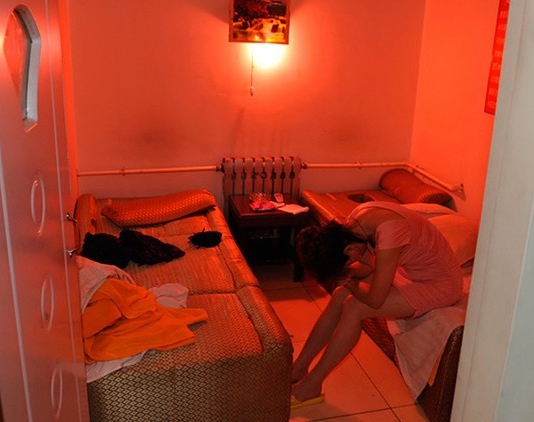